Don't You Wish You Were Here?

New Harbor’s great natural beauty is a powerful attraction to all who visit, yet preserving it’s natural beauty against future growth due to limits of water supply, land and building permits.

New Harbor was a most prominent landing for pioneers journeying to the new world. For more than 1,000 years it has been a landing for seafarers journeying to these shores. On approach to Monhegan from 40 to 60 miles out to sea, the tree-lined island and the coast of Maine is about 300 miles closer to Europe than any other part of the United States. The distinctive whale-shaped island has represented safe haven for sailors at sea.

Historians think that the Vikings were the first sailors to land on these shores. It is alleged that John Cabot in 1494 made his first landfall at Monhegan. The strongest verification of a landing is Giovanni da Verrazano in 1525, which the Verrazano-Narrows Bridge in New York is named. The surviving records of his ship, La Dauphine contain a description of the island by David Ingraham who was also a member of the crew. An indian of the crew, paddled from a place he called Sabino and peninsula he called Pemcuit (Pemaquid) where he rested over that night, when the morning broke,( I saw not far to seaward “ a great island that was backed like a whale".

An English sailor, Martin Pring, arrived and anchored at Monhegan in 1603 described the island while mapping out its exact latitude of 43-1/2 degrees North. Captain John Smith in 1614 described Monhegan as a part of America. English ships dealt in dried cod, martins , otter and beaver skins while engaging in the slave trading of Native Americans.

The fate of English colonies was tied to changes in English aristocracy when King James departed and Charles arrived in 1625. After years of feuding England and France became allies. As a result, the French began taking over English trading posts along the Maine coast which included New Harbor and Monhegan. By 1657 Monhegan was vacated. When Charles lost the Monarchy and Oliver Cromwell (1599-1658) established a short-lived republic, Monhegan became the property of Massachusetts Citizen, Nicholas Davidson. The Davidson family owned the island until 1747. This period signaled the beginning of Monhegan's greatest growth. Boats from Boston ventured to Monhegan on commercial fishing voyages. There was substantive settling on the Island and lower rung characters, drunken sailors, and desperadoes of all persuasions invaded the Island. The citizens of Monhegan asked the general court for protection and it was granted but because it had the largest settlement in the area including Kennebec, Sheepscot , Cape Newagen, Pemaquid and Damariscove, Monhegan was taxed the highest. The first legally executed deed in New England occurred in New Harbor.

The worst disturbance came to the area along with the French and Indian wars precipitated by the English revolution in 1688. James ll was forced to abdicate and escaped to France. In 1702, William of orange (a Protestant) ruled the Kingdom. His reign so disturbed Bostonians that they imprisoned their then Governor Andros who had been appointed by the deposed King James. King James in turn exacted his revenge by stirring up the French to wage war and ravage the English colonies in North America. Baron Castine, a Frenchman, made the Pemaquid region his first object of attack. The native Americans of the region became the pawns of the Baron who attacked the fort at Pemaquid in (1689) and subsequently moved on to Monhegan, destroying the fishing fleet. Monhegan was destroyed and many islanders escaped to Massachusetts. During this period the island was totally destroyed. It subsequently survived only as a stopover destination for fishing and the English Navy used the Island as a staging area to wage war.

With this brouhaha and the island's decline, the Davidson family sold the island to Shem Drowne, a Boston tinsmith who designed and built the famous grasshopper weathervane still seen today atop Faneuil Hall in Boston. He bought the Island for 10 pounds, 13 shillings. His son later sold the Island to the Bickford family of Salem and Beverly, Massachusetts for one hundred sixty pounds. The final sale of Monhegan was to Henry Trefethren from Kittery, Maine who handed over the Island to his son and his married daughters, Mary Starling and Sarah Horn, residing on the Island establishing the current generation of Monhegan-ites. Victor Lord, current resident, traces his lineage to the Starling family thereby establishing with Kole his son a direct lineage.

The importance of Monhegan Island as a landfall for all ships was a memorialized when the Monhegan lighthouse was built in 1824 just four years after Maine achieved statehood. Monhegan continues to be lavishly praised as the most beautiful of Maine islands. What continues to is the spiritual nexus between New Harbor and Monhegan are the sister lights of Pemaquid ( Pemaquid light) and Monhegan (Monhegan Light). Pemaquid Light is a magnificent stately light representing safe haven for all seafarers. When seagoing vessel sees Pemaquid light, a Mooring in New Harbor becomes clear, inevitable and comforting.

Monhegan light, the cornerstone, the eternal beacon and landmark the sine qua non for all who venture to sea, and but for its existence the term " lost at sea" might be more prevalent. Pemaquid and Monhegan lights are both automated and there are museums at both sites with rich historic memorabilia worthy of a visit. The Plantation of Monhegan and the Town of Bristol possess in its archives some of the most significant chronicling of American history. On June 9, 2003, Pemaquid Light was commemorated by the U.S. Mint in its state Quarters program. The Maine State quarter has George Washington on the obverse and Pemaquid Light on the reverse. 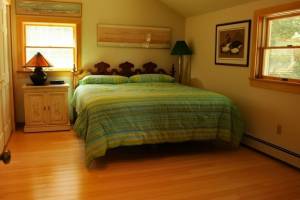 3 bedroom - The Sylvan is the newest addition to the Moorings, set back in a wooded area it is brand new construction with an open layout, 3 bedrooms, dramatic stone fireplace and large deck with harbor views. Now pet friendly! 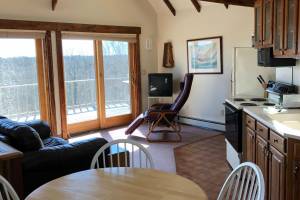 1 bedroom - The attached carriage house in the Brackett has been remodeled with living-dining-kitchen and bath on the first level and large bedroom (king) on the lower level. Both floors have private decks overlooking the ocean and harbor.

2 bedroom - The Brackett has been restored to its former historical uniqueness. It to has exceptional views of the harbor and all of the Moorings. It has a large living-dining-kitchen area, gas fireplace, two bedrooms (one full, one king), and bath. 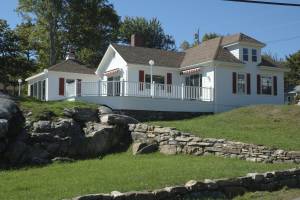 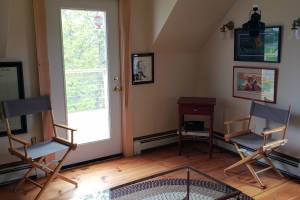 2 bedrooms - With the addition of a new deck, this penthouse apartment has breath taking views of the harbor and out Islands including Monhegan. The top level of this home has a living room, huge deck, eat-in kitchen, gas fireplace, two bedrooms (one double, one king), and bath with shower. 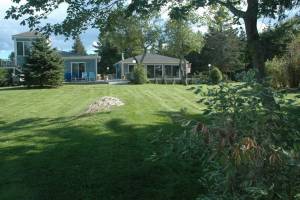 1 bedroom - The Poolside has decks facing north, south, east and west with views of the harbor. Includes open living-dining-kitchen area, cable and wifi . The bedroom (queen) has a 4-seasons addition which enables owner to lie in bed and watch the stars and the waterfall effect of rain.